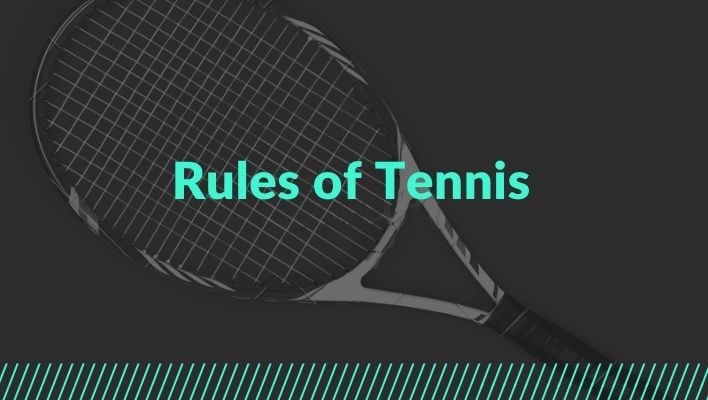 Rules of tennis are explained in simplest terminologies, so it helps in better understanding of the game, especially for the beginners.

Tennis is a complicated sport where “love” means zero. It has a different scoring system as compared to other games. I usually do not understand and get stuck while watching the game. The buzzwords used are not accessible when they cross your mind, making you think these rules are complex. Even if you are fully aware of these rules and terminologies, there are still chances to encounter something new.

Tennis is a vast game, and the rules cover different areas. These include boundary rules, scoring, time limitations, rules for singles and doubles, and many more. So, I dug into the internet to learn a whole set of rules to lead myself in the right direction. It benefitted me a lot, so now I think it’s time to enlighten you all too. Though playing some practice matches is the best way to learn about this sport.

Before going into the details of tennis rules, it’s essential to be familiar with basics of tennis.

The Basics of Tennis

Tennis is played on a rectangular-shaped court with the players standing on both sides. A net is placed in between while stringed racquets are used to play this game. Either a single or double match with two or four players is played, where they aim to score enough points to win the match.

A player or team can bounce the ball only once after it returns from the opponent’s side. If one fails to hit the ball into the correct court, the opponents win the game with enough points. After winning the spin, the players get three different options to choose from. Whether they want to serve or receive, at what side of the court they want to stand and defer their choice to the opponents.

Also read our guide about how to play tennis.

A tennis point or scoring is nothing more than playing several points by hitting the shots. Tennis has a different scoring system than other sports and uses some of the terminology not commonly used. Instead of using simple terms like 1, 2, 3 or 4, etc., the tennis players count points as 0, 15, 30, and 40. So having a zero point is called “love” in the game, and once the player wins, the score goes up to 15 x 0 points.

In case of missing the shot or losing, the score is the opposite, i.e., 0x15. Not to forget that the score of the server-side is counted first. If the team or player pulls off a point score of 40 and wins an additional point, he will be declared the winner of the match. If both the teams have an equal score of 40, also called a deuce, an additional few shots are played. The side scoring the first two points is considered the winner.

After the tie-breaker, both the teams go back to the 0x0 score, and the roles are interchanged. The servers are now the receivers and vice versa. The process continues until a team wins six games, and in case of a tie, a tie-breaker match is also played to take the trophy home. It is designed as standard tie-breaking matches that use a regular numerical system for counting the points. The first player or team who scores 7 points wins the game.

After going through the basics and point scoring system, it is essential to know some basic rules for singles and doubles. The only difference for these two types is in the boundaries, as doubles have more area to cover and hit. Let’s go through these rules and be aware of ourselves from the toss to the umpire’s responsibilities.

Before starting the match, all the players gather at the center of the court and decide which team will serve and the receiver. The umpire is responsible for making a call and asks the low-ranked players to choose between heads or tails. The winning team decides to be the server or receiver, or they can even select the side themselves. Most players choose to serve first because it gives an advantage to players.

A tennis match always starts with serving. The ball is hit in the air, passing over the net and dropping into the opponent’s side. If the players miss both of their opportunities to serve correctly, they will lose a point. A “let” occurs when the ball hits the edge of the net but lands on the opposite side. In this case, they serve again, but the feet should be behind the service line. The umpire gives a foot fault if they step onto the line. The players also need to serve within 30 seconds.

Line judges are present throughout the game, and it is their job to observe the players while playing. If a player crosses the bounds, he can call out any player by screaming in the middle of a match. Sometimes they can make mistakes as the playing actions might not be caught perfectly by the human eyes.

In this case, the players have the full right to challenge two times per set, but it has to be done at that specific time. Videos are referred if a conflict arises in the court. If the players are right, they get to retain the same number of challenges.

It is essential to winning 4 points before the opponent wins a game. A set comprises six games. These sets can vary and have no specific number. The tennis matches for women need two out of three sets to win, while for that of the men’s tennis tournaments, it is best three out of five. In the case of a tie, a tie-breaker is played among both teams.

Watch this video to learn more about tennis rules:

Ranking of the Players

The players are ranked in tennis after analyzing their performance in the matches. They are kept under observation for about a year, and their point-scoring is taken into consideration. If the players manage to play in the same form till the end of the game, they acquire the most points compared to the other players. Furthermore, seeding is awarded to the players, which helps the audiences to determine the best one in the court.

Tie-breaking matches are played when both the teams have the same score. To choose the winner among them, a tie-breaker is played. It is usually longer than the regular matches and has a standard scoring system like the other games. In case of equal scores in the tie-breaking matches, additional two points should be scored to win the title. The players also change sides after every two serves, but this is not true in all cases.

Deuce is a terminology used when the match is tied at 40-40. The players continue the game until they can score two points in a row for winning. “Advantage in” and “advantage out” are the two terms used for the players who win the first server and receiver, respectively. These might not be used in all tennis tournaments, and instead, they prefer changing their sides.

Tennis can be played as single players or with teammates as doubles. Both of these categories almost follow the same rules. Playing as doubles, the player who started serving will not get a chance again until the rest are done with serves. Moreover, the hitting space gets narrow as two people cover the court on the other side now.

Ball girls or boys are the helpers that accommodate the players throughout the game. They have to hand over the ball to the player who is doing the serves. They even take care of the player’s needs by giving them water or towels between short intervals. Moreover, they manage everything within a given time to avoid unnecessary delays.

The umpire has several responsibilities and solves the issues occurring during the tournaments. They observe very closely before making a call. They have to keep the crowd in control so they do not distract the players. The umpire can also warn the players if they act up with their opponents or the public.

What is the etiquette of tennis?

When you see a tennis match, it is necessary not to disturb players or repeatedly interrupt to ask for the scores. It is your responsibility to enjoy the game and let others do the same.

What is the equipment for tennis?

The leading equipment for playing tennis is a racquet, ball, net, and court. After having these basic things, you can buy tennis shoes and athletic costumes for yourself and focus on the racquet’s grip.

If you’re just starting playing tennis, you must have an idea of Tennis Equipment List. After that, you can read our review guides about the best tennis racquets and best tennis strings to purchase the best tennis equipment.

Can you score in tennis without serving?

Yes, you can score in a tennis match without serving. This is only possible when the opponent player or team misses a shot or hits the net. You will get points for the mistakes made by the other team.

All the rules of tennis are explained in the article above most simply. These have helped me in a better understanding of the game. I hope all this information can improve your skills while having some knowledge as a beginner. It is a fun sport and an excellent weekend activity, either alone or playing with friends.